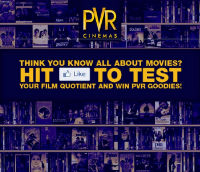 How AliveNow helped engage the movie-crazy audience on the PVR Cinemas Facebook page.

PVR approached us to see what interesting, creative and viral ideas we had in mind to engage with the large fan base on the page. The audience on the page were young and outgoing in nature. They also had a passion for movies and were fans of many actors, directors, films, etc. In general we could say that the knowledge level of these fans for movies was high. We came up with a simple but viral application on Facebook to engage with the audience on PVR and the campaign was a huge success!